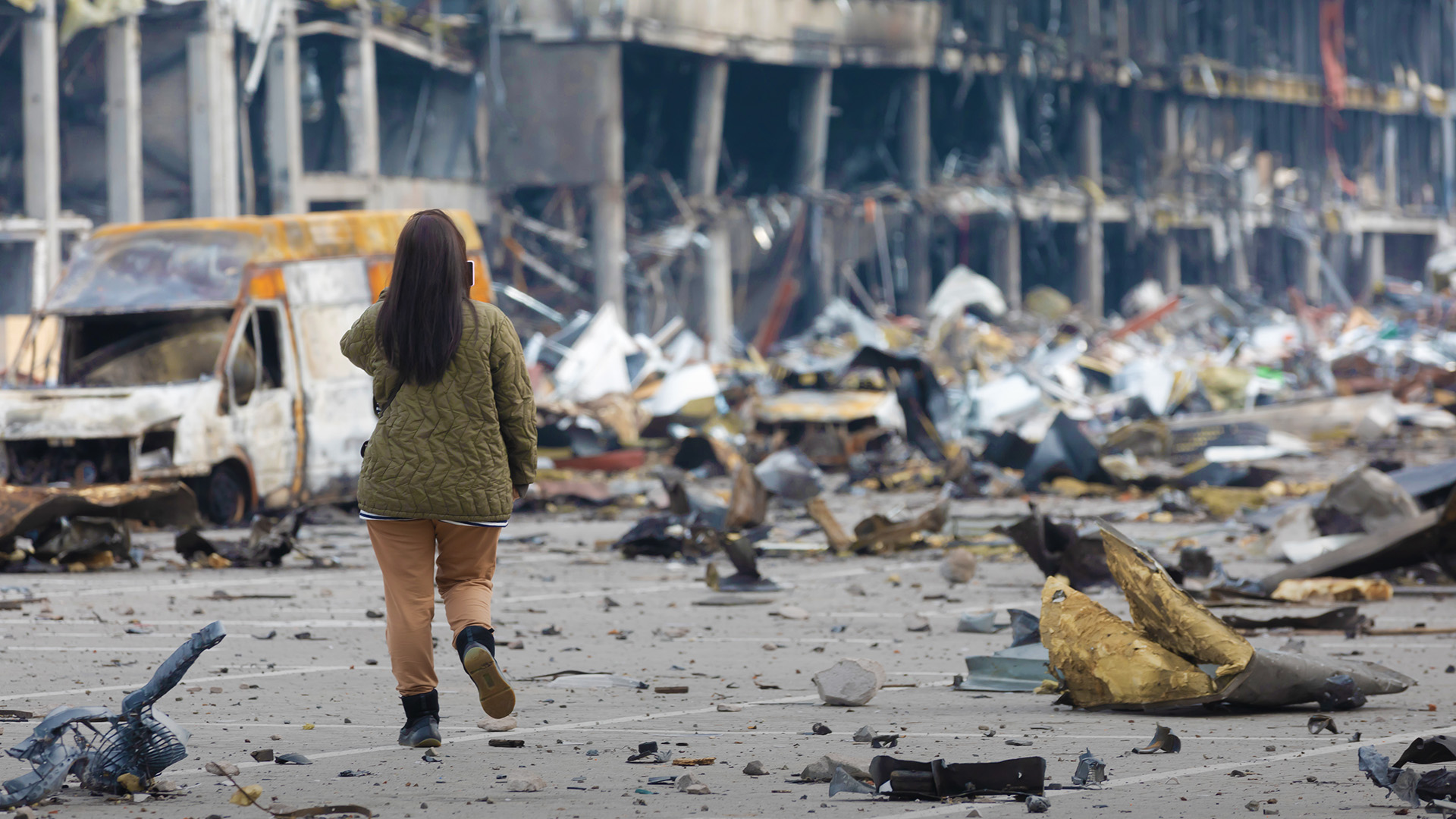 Surviving the War in Ukraine

One World Challenge volunteer’s experience in Ukraine reads like a memoir from World War II, as if it should be a glimpse into the distant past rather than the very recent life of so many Ukrainians like her.

I want to tell you about Tanya Biloshapka, our volunteer who lives in Borodyanka, 40 kilometers from Kyiv. For three and half years now, Tanya has been serving the elderly widows in need.

There was a large room in her house that she used to meet with the widows; it always had a cozy atmosphere. Tanya prepared food to treat the women, organized small entertainments such as painting and making homemade paper or beads. The grandmothers also had beauty days where Tanya invited in a masseur and worked herself as a hairdresser; meanwhile the ladies would wear face masks and do manicures.

Tanya writes and sings songs with the widows, as well as inviting various talented people to be part of the ministry. She has always been a vital part of our partners’ ministry in Ukraine.

Tanya, whom we wrote about in March, finally shares her story about what happened to her and her neighbors as the Russian invasion began.

“On February 24, my daughter from Kyiv called and said that a rocket had flown near their house. ‘Mom, the war has begun!’ It was about five o’clock in the morning. I called my friend Irina who lives nearby. I had to go to the store and withdraw cash. The day seemed long; people were buying groceries, and there were long queues at ATMs. In general, though, Borodyanka was quite calm. I was not going to go anywhere because there was nowhere to go, and I had no desire to leave my hometown either.

“On February 25, shots were heard near Gostomel and Vasylkiv. In the evening, the sky turned red. The constant rumble was scary.

“On February 26, an acquaintance called because the roar of cars and heavy machinery was approaching. The noise was getting closer and closer. On the same day, Russian tanks and military vehicles began to drive along the main street. At first, there were not many of them, but the next day, large convoys of military equipment entered our town.

“We sat in the cellar with friends. There were four of us women. The whole earth trembled beneath us. When I went outside, I thought it was snowing; in fact it was the ashes of houses being destroyed by the Russian military. In the evening, the sky was very clear and starry, there was a terrible silence. I saw a glowing line in the sky, and it was moving towards Kyiv, then I was told that it was a rocket.

“We woke up very early on February 28 and were cooked porridge. I approached the window overlooking the road. Before me was a picture from World War II: tanks with five or six soldiers on each in dark green uniforms. They were followed by a convoy of fuel trucks. My friend noticed that the column was beginning to turn toward our house. We all quickly ran to the cellar. At about 8:30 a.m., three shots were heard. The third shot hit our house; stones fell in the cellar, and water poured out. We realized that the house’s pipes were broken, and the water began to flood the cellar. We waited as long as we could before we realized we needed to escape.

“When I hesitantly emerged, I could see a neighbor’s house because of the big hole in the wall of my house; the rooms were destroyed. Tanks were still going by, followed by machine guns; they kept firing at houses. One of our dogs had refused to come down into the cellar, and I couldn’t find him upstairs. When the shooting died down, a neighbor came to help us dig through the rubble. We were pulling our backpacks that we’d stuffed earlier with important documents out of the rubble when our dog came running out of the house’s still intact rooms. He was miraculously still alive!

“Later, after it had calmed down, we decided to hide in a neighbor’s house that was mostly still intact; only their windows and doors had been damaged by the blast. I was very grateful to God for my neighbor who made us tea, and we were able to rest. Soon, though, we heard a column of the Russian military approaching, so we went down to the cellar where the generator was. The neighbor went out into the yard to see what was happening, but he immediately returned and said we all needed to run away because the house over us was on fire, and a gas cylinder had landed near the cellar. We ran to my garden and hid there until the shelling became too heavy. We had to run down the street to a large building that had a basement; many people from all over the city were gathered there.

“That evening, I returned to my broken house to get blankets and warm clothes. It was very scary. The sound of tanks firing was still close by, but the worst was yet to come.

“Planes began to drop bombs on our town. We just stood in that basement and prayed, ‘Lord, forgive and have mercy on us!’ Even people who were not believers shouted, ‘Pray!’ A woman came to us from the city center without anything but a small child in her arms. The bombs knocked out all electricity; the lights went out, and it was very dark for a long time. Gas from shells filled the air. We heard of Russian soldiers entering houses, searching for people. We did not know if we would ever leave the basement.

“Fear reduces everything inside the body. Fear shackles a person…

“After a while, people started to run away. Cars came, the drivers offering to take anyone who could fit with them. One of the cars had two empty seats left, but one of the woman who was with us lay down on the floor and said she was not going anywhere, and we couldn’t bring ourselves to leave her. In my thoughts, I said goodbye to my daughter many times. We stayed in the basement for days. We threw as much as possible out of our backpacks because we thought we would have to run away on foot.

“Finally, a driver took us all and allowed us to bring our dogs. Broken vehicles and burnt tanks stood in the streets. On the way, we stopped to pick up children and the elderly. We were taken to the neighboring village Zagaltsi, fed and then taken to Piskivka where we slept for one night. From there, we went to Rivne and Ternopil.

“Now we are far from home. The Lord saved our lives. I am grateful to Him for the opportunity to live. One day, we will definitely return home. Thank you to my Savior Jesus Christ for everything!”