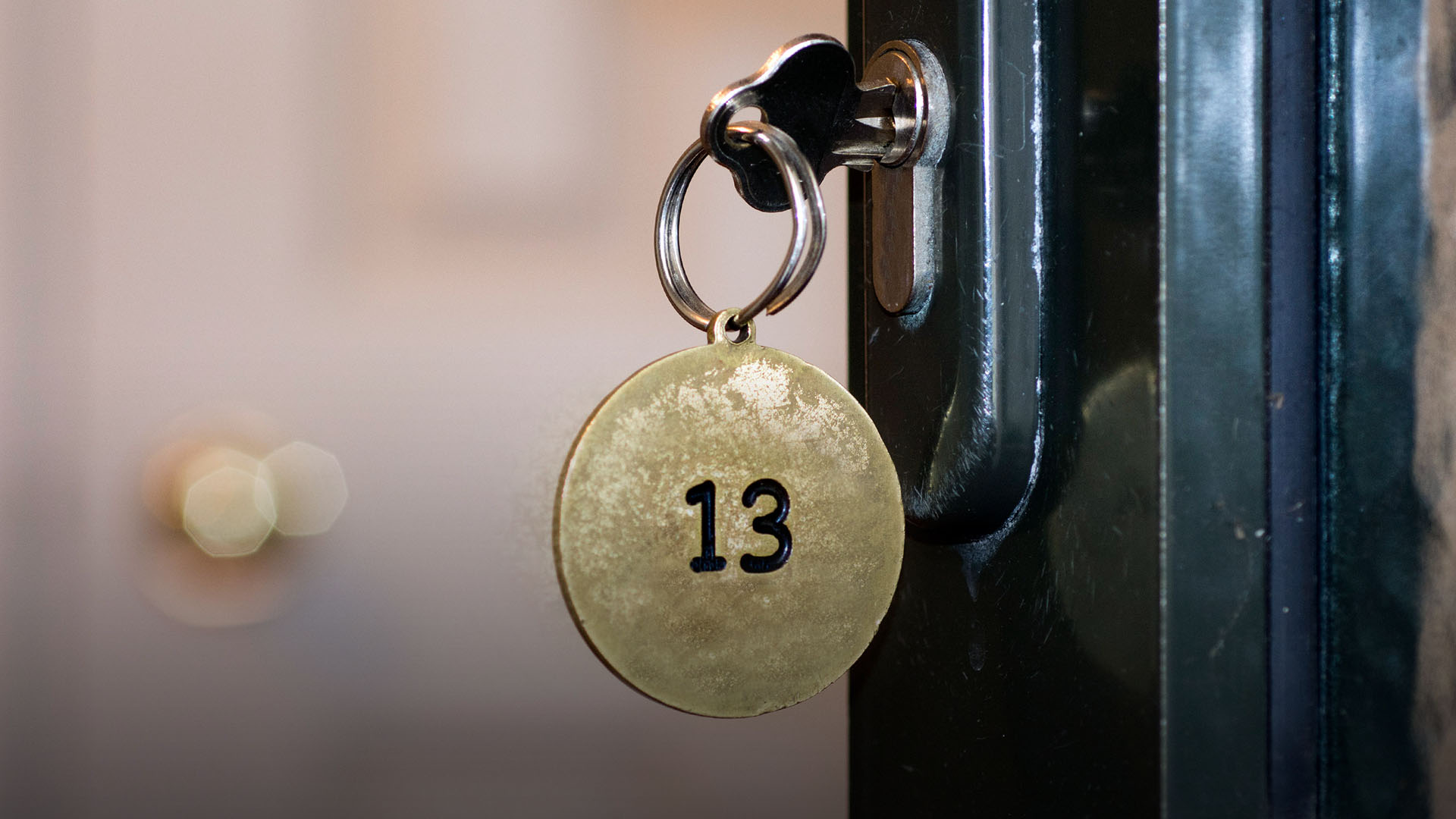 Is it unbiblical for Christians to talk about lucky and unlucky situations in life, or are there circumstances where that perspective is okay?

Donald Dossey, a folklore historian and author of Holiday Folklore, Phobias and Fun, wrote about his studies on Friday the 13th in National Geographic.

“Dossey traces the fear of the number 13 — aka, triskaidekaphobia — to a Norse myth about 12 gods having a dinner party at Valhalla, Norse mythology's heaven. In walked the uninvited 13th guest, the mischievous god Loki. Once there, Loki arranged for Hoder, the blind god of darkness, to shoot Balder the Beautiful, the god of joy and gladness, with a mistletoe-tipped arrow.

“There is also a biblical reference to the unlucky number 13. Judas, the apostle said to have betrayed Jesus, was the 13th guest to the Last Supper….

“As for Friday, it's well known among Christians as the day Jesus was crucified. Also, some biblical scholars believe Eve tempted Adam with the forbidden fruit on Friday. Perhaps most significant is a belief that Abel was slain by his brother Cain on Friday the 13th.”

Putting aside the frankly ridiculous idea that Adam and Eve already had a Gregorian calendar and the fact that no reliable record exists of what order the disciples entered the Passover room, the idea of lucky and unlucky numbers or events remains for many believers.

Is it wrong as a Christian to say that something is lucky or unlucky?

Letting the Events Play Out

Many Christians would avow that we cannot be true Christ-followers and believe in any kind of luck since everything is overseen and given or withheld by our heavenly Father. However, I would argue that first it’s worth defining what we mean by ‘luck.’

The term can simply mean an assortment of details, events and individuals came together in a way that we could not have predicted.

One time while a group of friends and I were playing a game of Monopoly, someone threw the dice a little too aggressively. Both dice bounced off the board, hit another player in the chest, ricocheted off the board again, scattered gameboard pieces and one landed on the floor while the other skidded under the couch.

Both turned out to have landed on sixes. The entire group erupted into bedlam. Screaming and cheering, we threw fake money at my one friend who stood with the dice held over his head, yelling, “Lucky!”

While we technically could attribute God’s providence to my friend landing a spectacularly unpredictable roll, it would feel a bit sanctimonious. It’s hard to argue that God was really invested in who won that Monopoly game or that his grace would express itself in such a way to my friend. (Especially since he ended up losing the game anyway.)

Equally true, however, is the fact that God created and maintains all of the elements which led to that ‘lucky’ throw.

Compelling Truth explains, “The idea of luck brings up a difficult theological discussion: does God ordain everything that happens to us, or does He let nature and human choice play out to their inevitable end? The answer is a confusing ‘both.’ We do often bear the repercussions of choices — ours and others — without the apparent interference of God. In other cases, He acts in a way we call ‘miracles.’ How, when, and why He acts are usually hidden from us.”

In these cases, saying we’re lucky or unlucky may simply be recognizing that we came out on the top or the bottom of circumstances we could not control ourselves and that God did not seem to overtly influence one way or the other.

This may have been what the writer of Ecclesiastes was referring to when he wrote, “Again I saw that under the sun the race is not to the swift, nor the battle to the strong, nor bread to the wise, nor riches to the intelligent, nor favor to those with knowledge, but time and chance happen to them all” (Ecclesiastes 9:11, ESV).

Just Being a Little Insulting

“Lucky” or “unlucky” can have another set of meanings that are more nefarious, especially as they start to associate with positive or negative payout in direct proportion to our actions.

These can range from as seemingly innocuous as not talking about a heart-felt desire for the future before it comes true all the way to those who earnestly believe that not saying a prayer before a road trip will result in a flat tire or a wreck. These nagging beliefs reduce God to a kind of Buddha whose belly we rub for good fortune or a capricious faery who grants double-edged gifts in response to our wishes.

This mentality may seem silly in the abstract, but superstitiousness offers us a false sense of control over life, and it often appears in our propensity toward the prosperity gospel or ritualizing certain spiritual disciples.

We have to have certain worship songs or else the Holy Spirit won’t be as effective in the service. We have to read our Bible as soon as our feet hit the floor, or else it’s going to be a bad day. We have to shoehorn at least one evangelistic conversation in with all of our coworkers, or else our spiritual life will wither and die.

Notice that none of these things are completely wrong per se, but the motivation is off, and the consequences are taken out of God’s hands.

Working through God’s Word regularly is an important spiritual discipline, but it’s not going to guarantee that we have a good day. It will, hopefully, ensure that we have the right mentality about both the good and bad days, but there’s nothing we can do to manipulate God into making our children behave well or forcing everyone in our board meeting to agree with our ideas.

This kind of ‘luck’ is really about our attempt to control certain outcomes in life without having to rely on the wisdom and character of God.

Perhaps we don’t completely fall into this camp. Maybe we thank God for all the little good things in life, but the losses and frustrating incidents are attributed to ‘bad luck.’ Still, what does that ultimately say about God’s control over our lives and world?

“Think about it,” Erik Raymond challenges readers. “How ugly is it for you receive the blessed artwork of divine providence, which God works together for his glory, and then you turn around and smudge out God’s name from the authorship only to inscribe the nebulous, impersonal and fictional name ‘luck’ at the bottom right corner of the artwork? Since God does all things for his glory and causes all things to work together for good for those who love him (Rom. 8.28) how dare we insult God…?”

No Room for Superstitions

In the Old Testament, the Israelites go out to fight their age-old enemies, the Philistines, but they lose. After that, we’re given this fascinating but deeply convicting line: “[W]hen the people came to the camp, the elders of Israel said, ‘Why has the Lord defeated us today before the Philistines? Let us bring the ark of the covenant of the Lord here from Shiloh, that it may come among us and save us from the power of our enemies’” (1 Samuel 4:3).

They don’t talk to God. They don’t repent of any sins. They just replicate history and go through the motions of an old tradition originally designed to humble them and remind them of their dependency on God.

A few verses later, we’re told how using God’s ark like a spiritual rabbit’s foot turns out. “…Israel was defeated, and they fled, every man to his home. And there was a very great slaughter, for thirty thousand foot soldiers of Israel fell. And the ark of God was captured…” (1 Samuel 4:10-11).

Rather than confirm this sad, superstitious view of him in any way, God allowed his people to suffer a devastating loss that opened the way for Samuel to become the country’s prophet and turn a nation away from false worship. Like a surgeon, he went about carefully cutting out their faulty view of him and then bringing them to a healthier place. He would not be manipulated into blessing his people, and he did not trick them with false blessings or conversely bad luck.

Perhaps we call the parts of life outside our control lucky or unlucky, but mere coincidence or karma has no place in God’s carefully crafted symphony.

This Friday the 13th, may you go out and about in confidence that your good and loving Father controls all things and orchestrates everything in this world and beyond it for his glory.