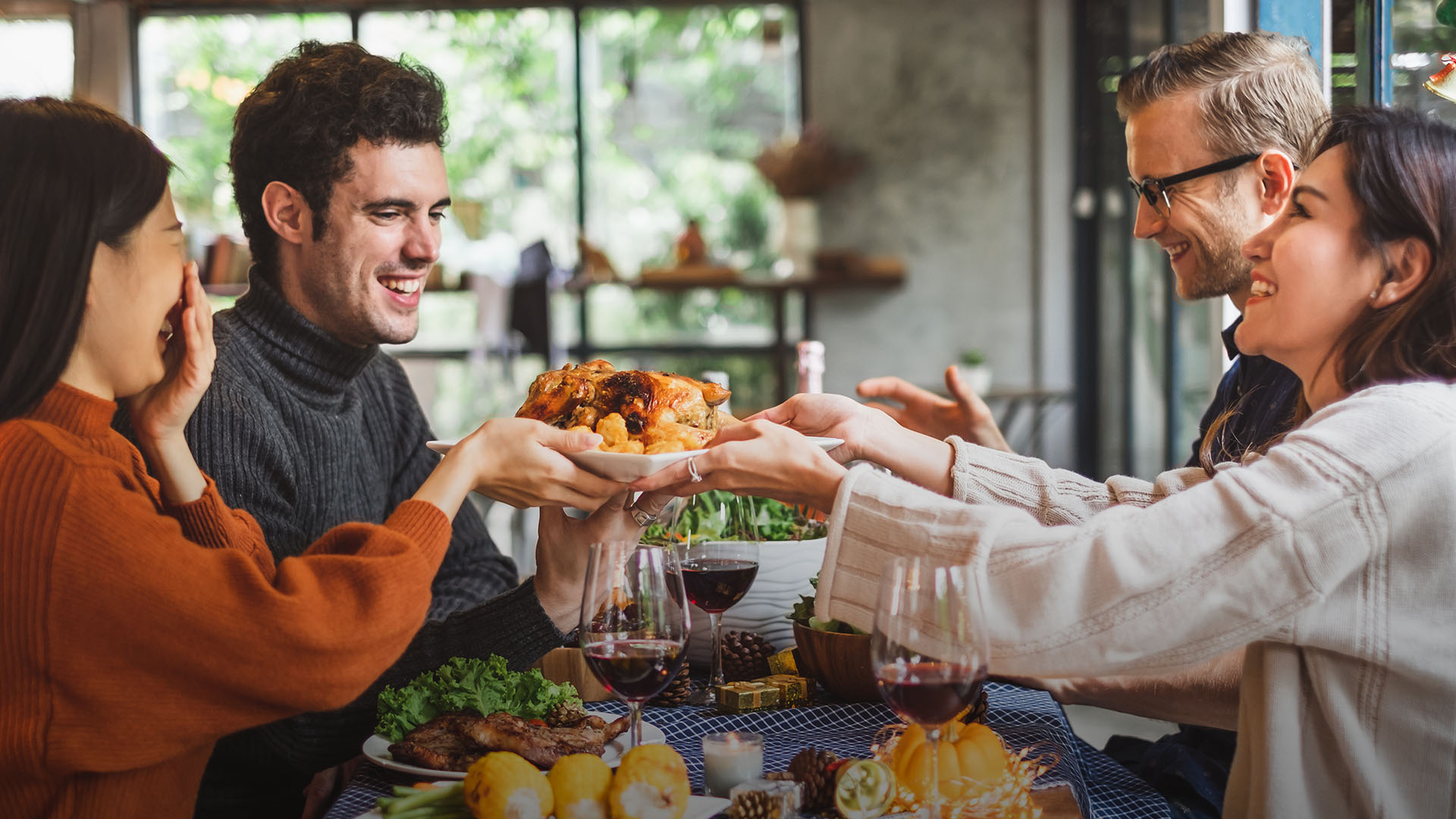 Thanksgiving With the Knives Out

Sometimes the worst in our families and ourselves comes out during the holidays, so how do we make this season the beautiful time it’s supposed to be?

“’The great Father,’ he declared, ‘has given us this year an abundant harvest...and granted us freedom to worship God according to the dictates of our own conscience.’ He directed the Pilgrims to gather that November, ‘the third year since ye Pilgrims landed on ye Plymouth Rock, there to listen to ye Pastor and render Thanksgiving to ye Almighty God for all his blessings.’

“Except Bradford didn't write that.

“Someone — we don't know who — fabricated this ‘proclamation’ in the late 20th century…. Yet quotes from Bradford's ‘proclamation’ circulate around the internet and appear in books such as 48 Liberal Lies About American History and Sermon Outlines for Busy Pastors.

“Surviving records from the Pilgrims actually tell us little about the ‘first Thanksgiving,’ tempting folks to fill in details where they don't exist. In this, the Pilgrims join a long line of historical characters that Americans — and especially some evangelicals — have attempted to form in their own image.”

This temptation to put a rosy glow around this holiday quickly runs into trouble with historic details like “not long after the first Thanksgiving — which was indeed a peaceful, if tense meal between the English and their Wampanoag neighbors — the Pilgrims launched a preemptive assault on local Massachusetts Indians that resulted in violence and bitter resentments. The English even placed the severed head of one Native American on a pike outside their fort.

“Recalling this is telling the truth, not revisionist history. Even one of their dismayed former pastors wrote from Holland that he wished they had converted some Indians to Christianity ‘before you had killed any!’”

Those of us with more ‘challenging’ families to deal with at Thanksgiving might relate.

Two Reasons Not to Stab Anyone

Remembering the ‘reason for the season’ is tough when Uncle Hamlog begins railing against the results of the most recent election, three of the youngest cousins have devolved into raptors and are having a screaming contest in the back room, or Stepmom Teetotaler starts shooting snide comments at whichever relative had to gall to serve real champagne at their wedding (the bride had her shoulders uncovered too, shameless little hussy).

People are often ridiculous, painful or outright hateful. In a sinful world, that’s an unfortunate result and reality. This becomes especially hard when they’re also the ones that we’re called to love and respect.

Family is usually a regular fixture of life, so there’s increased opportunities for everyone to hurt each another.

While most people talk about gratitude during Thanksgiving, we might do well to consider forgiveness as well, as Pastor Claude Houde, founder of Église Nouvelle Vie and World Challenge board member, noted in a pre-Thanksgiving sermon. “The church [or family] is a collision of imperfection. When we are coming together with all of our lives, backgrounds, hurt people that hurt people — I’m not a prophet, but I can prophesy this to you…in the next year, at one point or another, you will be offended….

The second prophesy is I promise you that, in the next year, you will offend someone. You will disappoint someone…. In the end, what destroys and tears up marriages, lives, relationships, churches is not the offense; it’s the refusal to forgive.”

Pastor Houde added, “With unforgiveness comes anger and a certain blindness. Your past is being distorted and your present. Your thanksgiving begins to be aborted. You can’t thank God for anything. You begin not to see. You’re blinded to other people’s qualities. You’re blinded to what God can do and has done and will do for you. Unforgiveness can even make our worship something that God rejects.”

Even laying aside the personal effects of unforgiveness, Rick Thomas points out another reason in his article for how to have a genuine Thanksgiving with difficult people: “The point of the gospel coming into your life was not to give you all of your dreams or to meet all of your expectations. Salvation was not granted to you so you could relax, but so you could get busy sharing Christ with others (Philippians 1:29).

“The gospel is a rugged cross that must be modeled and taught to needy men and women. The gospel is the message in your heart that He wants you to carry to those who need to hear it, like Uncle Biff. If our gospel cannot transcend our differences, we have no gospel worth discussing.”

Living our lives not only free from the shackles of unforgiveness but also as a witness to skeptical family members is easy to forget about in the middle of conflict. The Bible doesn’t give us any excuses, though. “Christ reconciled us to himself and gave us the ministry of reconciliation; that is, in Christ God was reconciling the world to himself, not counting their trespasses against them, and entrusting to us the message of reconciliation (2 Corinthians 5:18-19).

That message of reconciliation is for family too.

Putting Away the Sharp Cutlery

In 1863, the Civil War was in full swing. That summer, the Vicksburg and Gettysburg campaigns carved a grisly path across the United States. The entire country was wracked by conflict, and even families were at odds with one another over the political stances they had taken and the atrocities that were piling up on both sides as a result.

President Abraham Lincoln sat down that October and, in the middle of this nation-wide tension, wrote, “The year that is drawing towards its close, has been filled with the blessings of fruitful fields and healthful skies.

“To these bounties, which are so constantly enjoyed that we are prone to forget the source from which they come, others have been added, which are of so extraordinary a nature, that they cannot fail to penetrate and soften even the heart which is habitually insensible to the ever watchful providence of Almighty God.

“In the midst of a civil war of unequalled magnitude and severity…peace has been preserved with all [foreign] nations, order has been maintained, the laws have been respected and obeyed, and harmony has prevailed everywhere except in the theatre of military conflict…. No human counsel hath devised nor hath any mortal hand worked out these great things. They are the gracious gifts of the Most High God, who, while dealing with us in anger for our sins, hath nevertheless remembered mercy.

“It has seemed to me fit and proper that they should be solemnly, reverently and gratefully acknowledged as with one heart and one voice by the whole American People.

“I do therefore invite my fellow citizens in every part of the United States, and also those who are at sea and those who are sojourning in foreign lands, to set apart and observe the last Thursday of November next, as a day of Thanksgiving and Praise to our beneficent Father who dwelleth in the Heavens.

“And I recommend to them that while offering up the ascriptions justly due to Him for such singular deliverances and blessings, they do also, with humble penitence for our national perverseness and disobedience, commend to His tender care all those who have become widows, orphans, mourners or sufferers in the lamentable civil strife in which we are unavoidably engaged, and fervently implore the interposition of the Almighty Hand to heal the wounds of the nation and to restore it as soon as may be consistent with the Divine purposes to the full enjoyment of peace, harmony, tranquillity [sic] and Union.”

As we approach this Thanksgiving in a year that has been polarized — violently at times — by medical horrors and political strife, we must prepare to meet with the broken, anxious people who are our family. The lion’s share of that preparation will be forgiving past hurts and submitting ourselves to the Lord of mercy.

The holiday may not be easy, but it can still be filled with gratitude for the good God we serve.