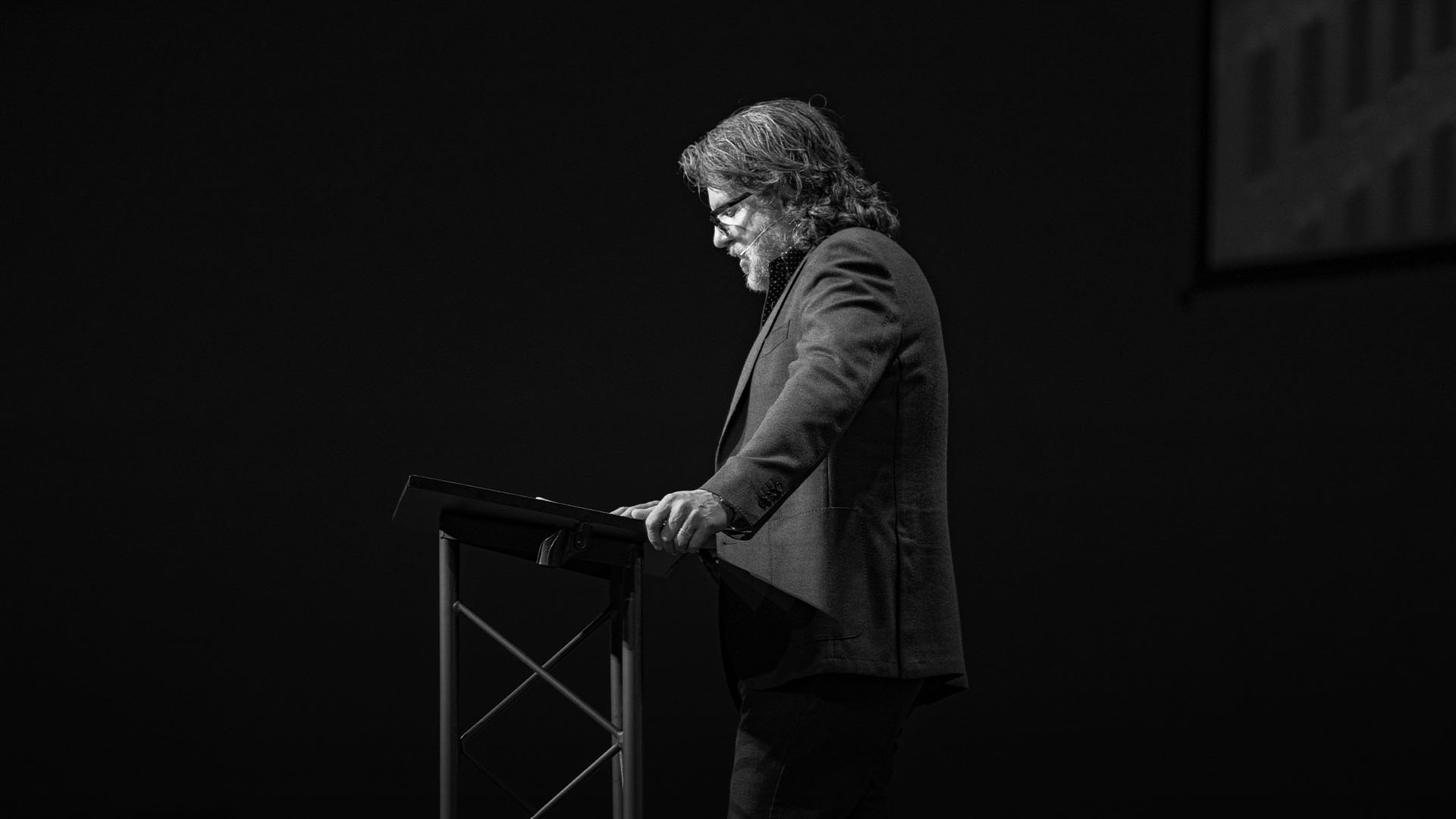 Fire in Our Bones

“If I say, ‘I will not mention him, or speak any more in his name,’ there is in my heart as it were a burning fire shut up in my bones, and I am weary with holding it in, and I cannot” (Jeremiah 20:9, ESV).

Jeremiah prophesied to a terror-stricken nation. The cry in Israel was “Fear on every side!” (Jeremiah 6:25, 20:10, 49:29). While people were gripped with terror, the prophet was grieved and troubled by what he saw happening in the land. Immorality was rampant, and God’s people were in a horrible spiritual decline.

If Jeremiah were alive in America today, I believe he would see the same thing happening in our land. He would tell us that we’re facing just what his generation faced: a moral collapse, a tidal wave of unprecedented sexual perversion and a society rapidly rejecting God.

There is something even more troubling than this. Tragically, Christ’s church has been ineffective in turning the tide. God’s people are too prayerless and thus powerless at the very moment we should be calling on God with effective fervency. We’ve grown spiritually anemic, distracted by entertainment and a pursuit of fleshly cravings.

A famous quote, attributed to either C. H. Spurgeon or Archibald Brown, prophesied all of this more than a century ago: “A time will come when instead of shepherds feeding the sheep, the church will have clowns entertaining the goats.”

That time is now. The hour has come for repentance of the heart, revival in the church and a spiritual awakening in our nation.

As the church faces its most desperate hour, it is in need of its greatest awakening.

While atheism has doubled in the past two decades, the church has dwindled by 20 percent.

Paganism is rapidly on the rise with morality in a freefall. Things are happening in our society that we never could have imagined.

A Florida teacher led elementary-school kids on an educational field trip to a local gay bar. Meanwhile, parents, doctors and educators are advocating for the mutilation of children who have gender dysphoria. These little ones are uncertain or confused about their gender identity. Many are given hormone blockers, known as puberty blockers, to delay or create physical changes that don’t match their gender identity. At a certain age, some undergo horrific sex-change surgeries.

The confusion of the present generation is so great that it doesn’t know how to define “woman.” The biblical mandate of marriage as between one man and one woman is held in contempt. Very soon we could see forceful advocacy for the acceptance of pedophilia. Articles and Youtube videos show scholars arguing to change the use of the word “pedophile” to “minor-attracted persons (MAPs)” to de-stigmatize people who have an attraction to children. Language has always been a tool for gradual shifts in culture, and over time, with momentum, acts of pedophilia could become tolerated.

Through the years, I have heard it said that our nation is becoming more and more like Sodom and Gomorrah. I believe our moral decline has actually surpassed those societies’, that in fact, they would be shocked by what they would see happening today. We are witnessing an entire nation turned over to a depraved mind. “And since they did not see fit to acknowledge God, God gave them up to a debased mind to do what ought not to be done” (Romans 1:28).

These things are cause for alarm, but what’s more alarming is that we are not alarmed.

As moral chaos unfolds, the church continues with business as usual. Congregations remain prayerless while their leaders lack holy integrity. Churches substitute entertainment for true worship; the gospel is watered down and preached tepidly, and the people lead lukewarm, compromised lifestyles. As we consider all of the world’s alarming news, we may be offended, but how are we responding? Are we prayerful, preaching truth and contending for the faith? Or are we focused only on ourselves?

Oh, that God would give us Jeremiah’s fire for our generation! Oh, that men and women of God would regain their zeal for the supremacy of Jesus Christ. Oh, that leaders would return to preaching the uncompromised Word of God and calling for repentance, holiness and passion for him.

Churches should produce men and women of God with fire shut up in their bones. Such servants aren’t timid or swayed by worldly influences and false teachings that inundate the church today. Their words aren’t watered down but carry a holy fire as they contend for a most holy faith.

That fire is needed in America.

With all the horrors facing Jeremiah’s generation, what did the prophet see as the antidote?

Was the answer in better government rule, more education or a correction in the social and moral order? No. Jeremiah pointed to one thing as the only hope: God’s Word. “But his word was in my heart like a burning fire shut up in my bones” (Jeremiah 20:9). Jeremiah said God’s Word burned so fiercely within him that it wearied him to withhold it. “…there is in my heart as it were a burning fire shut up in my bones, and I am weary with holding it in” (Jeremiah 20:9).

So, what was the antidote both for the nation and for Jeremiah? It was to no longer hold back God’s Word. “I am weary with holding it in, and I cannot” (20:9).

Jeremiah’s message is a timeless shout to us from the housetops. It is time to stop holding back! It is time to stop all futile, fruitless efforts to draw curious crowds to lifeless churches. The answer is to be enflamed for Jesus, then people will be drawn to watch us burn!

It is time for Christians to burn afresh with renewed passion for the things of God and the uncompromised truth of his Word. It is time to renew our cry for a great move of the Spirit in this land.

Picture your pastor experiencing a powerful personal revival, having a true spiritual awakening.

Imagine the sermons you would hear coming forth in purity and power. Imagine the refining of your soul and the refreshing of your spirit from God’s uncompromised Word instead of sermons of self-help, pop psychology or TED Talks-type pabulum. Imagine each Sunday seeing a leader in the pulpit brokenhearted and on their knees crying out for you, the congregation, the city and the nation.

Imagine the church ridding itself of foolish reliance on entertainment, flashy trends and how-to gimmicks for church growth. Imagine Christians stirring themselves to return to the heart of the gospel, repentance, holiness and being empowered by the Holy Spirit.

Imagine what would happen in your life, church, city and nation if pastors and laypeople once again believed that Jesus is enough and the gospel is sufficient. You would come alive to the hope that your loved ones will come to Jesus, that your local schools will turn from immoral instruction, and that your government officials will open themselves to godly influence instead of worldly, wicked counsel.

Imagine all that Paul saw taking place in the Spirit’s great move in Ephesus. God has the same power to change things  today. It is possible to see his church revived and empowered to bring spiritual awakening to a nation in its spiritual death throes. America could be turned around before it’s too late.

This month’s newsletter, as you see, is not a sermon but a twofold appeal for pastors to seek God’s fire and for all Christians to cry out for revival.

It is time to pray. It is time for each of us to appeal to heaven for a revival in the church and an awakening in the nation. Jeremiah says it is God’s Word to us to trust and believe him to move on a generation. I implore you to begin praying now for all pastors and church leaders to be faithful, on-fire messengers of his Word for the sake of our nation.

It is my burning passion to see the leaders of Christ’s church experience a fresh fire. This is why World Challenge is conducting Fire in Our Bones, two nationwide pastors and leaders conferences next year. They will be held in San Diego in February and at Times Square Church in New York City in August.

We seek, trust and believe God to use these events to enflame the hearts of thousands of pastors and leaders. We pray in turn that their fire will impact many thousands of lives throughout the nation. Pastors Carter Conlon, Tim Delina, R. T. Kendall, Claude Houde, John Bailey, Ron Brown and I will bring forth God’s Word in prayerful belief that these gatherings will be used mightily of the Lord.

My purpose in this unusual form of communication to you is twofold.

If you are a pastor, I ask you to pray about attending. If you aren’t a pastor, I ask you to pray that your pastor would consider attending. Most importantly, we are asking God to give us 1,000 intercessory prayer warriors who will commit to pray every day between now and next August for the Fire in Our Bones conferences. We also ask every Christian to pray faithfully alongside us for a revival among U.S. churches that will stir a spiritual awakening.

You will find more information about these conferences as well as how to sign up as one of our 1,000 prayer warriors in the enclosed insert. If you choose to be an intercessor, we will send you prayer requests, prayer updates and encouragements to keep the fire burning in your own heart.

In closing, I believe we all agree that our nation is in troubled times. I also believe we agree that the power of God is infinitely greater than the powers of the world and the devil (see 1 John 4:4, ESV). We believe God is able to do far beyond all that we think or imagine (see Ephesians 3:20). I for one am imagining a great, mighty last-days move of God in America and around the world. Join us in this prayerful belief and anticipation of God’s hand moving.

FIRE IN OUR BONES