How We Fill Our Hearts

Scripture talks about the contents of our hearts and how important it is, so how do we determine what is in this secret place within us and purify it?

Malcolm Gladwell, in his famous book Talking to Strangers, wrote about the deeply confusing depths and potential evils of the human heart, although he probably would not have termed it in such a way.

“Some years ago there was a famous case in Texas in which a young man named Patrick Dale Walker put a gun to his ex-girlfriend’s head — only to have the gun jam as he pulled the trigger. The judge in his case set bail at $1 million, then lowered it to $25,000 after Walker had spent four days in jail, on the grounds that this was long enough for him to ‘cool off.’ Walker, the judge explained later, had nothing on his record, ‘not even a traffic ticket.’ He was polite: ‘He was a real low-key, mild-mannered young man. The kid, from what I understand, is a real smart kid. He was valedictorian of his class. He graduated from college. This was supposedly his first girlfriend.’

“Most important, according to the judge, Walker showed remorse. The judge thought Walker was transparent. But what does ‘showed remorse’ mean? Did he put on a sad face, cast his eyes down, and lower his head, the way he had seen people show remorse on a thousand television shows? And why do we think that if someone puts on a sad face, casts their eyes down, and lowers their head, then some kind of sea change has taken place in their heart? Life is not Friends.

“Seeing Walker didn’t help the judge. It hurt him. It allowed him to explain away the simple fact that Walker had put a gun to his girlfriend’s head and failed to kill her only because the gun misfired.

“Four months later, while out on bail, Walker shot his girlfriend to death.”

This well-educated, respectful man with no record of crime attempted murder and then, upon being granted a nigh-miraculous level of clemency, went out and completed the act for which he had been arrested then forgiven the first time. Why?

The Darkness We Pour Inside

While reading about incidents like Walker’s, it’s easy to give myself the excuse of “Well, I would never be a psycho like that” in the same way that I’m sure many of the Pharisees of Jesus’ time never thought that they would be responsible for the murder of humanity’s only true innocent.

Christ had a way of speaking to one person or group, like the Pharisees, and then bringing everyone into the spotlight, particularly when he said things like “You offspring of vipers! How can you speak good things when you are evil (wicked)? For out of the fullness (the overflow, the superabundance) of the heart the mouth speaks.

“But I tell you, on the day of judgment men will have to give account for every idle (inoperative, nonworking) word they speak.

Considering that our mouths will signal whatever’s in our hearts is a frightening thought, especially when we consider that Jesus included those words we speak in private. “Nothing is covered up that will not be revealed, or hidden that will not be known. Therefore whatever you have said in the dark shall be heard in the light, and what you have whispered in private rooms shall be proclaimed on the housetops” (Luke 12:2-3, ESV).

The words I whispered in the night and those I have written in text messages or private journals will all testify one day before God to what has been in my heart. That’s not necessarily comforting thought. In his sermon “Out of the Abundance of the Heart”, David Wilkerson talked about tracking what is making deposits into our hearts.

“The man who indulges in pornography, he's going to think dirty. He's going to talk dirty, and he's going to listen to and tell dirty jokes. I can always tell a man who's into pornography because whatever you deposit in your mind and your heart is going to come out your mouth….

“What about this prosperity gospel that so many are involved in now? One man who was into this was so saturated with it that's all he could see in the scripture. Everything he said, everything he saw — he would go through proverbs and psalms, every scripture verse — he was so slanted in this direction. There was no balance in his life because he shut himself up in a garage with every prosperity tape of every preacher he could get, and he shut himself in, I think, for 30 days in his garage and saturated his mind with it. No wonder that's all he talks about. That's the deposit he made. Whatever’s in your art in abundance will come out your mouth.”

What is abundant in my television shows, movies, books, news, artwork, music, conversations and friendships? I can’t hide from the world, but I can manage what I’m exposed to on a daily basis.

What Is Good, What Is Pure

Reducing negative ‘deposits’ into our hearts is only half of the work, however. If we’re taking away something, we need to fill that space with something else.

Jesus naturally speaks to this as well. “Fear not, little flock, for it is your Father’s good pleasure to give you the kingdom. Sell your possessions, and give to the needy. Provide yourselves with moneybags that do not grow old, with a treasure in the heavens that does not fail, where no thief approaches and no moth destroys. For where your treasure is, there will your heart be also” (Luke 12:32-34).

As we focus on God’s promises and what is his ‘good pleasure’, the business of the Spirit wherever it may be, our minds and lives will fill with those good deposits. Time spent pouring over the scripture and reflecting on material that exemplifies those truths will greatly benefit those who are looking to fill their hearts with better material. This is why Paul wrote to the church, “Finally, brothers, whatever is true, whatever is honorable, whatever is just, whatever is pure, whatever is lovely, whatever is commendable, if there is any excellence, if there is anything worthy of praise, think about these things” (Philippians 4:8).

God commands this because he knows that he is the greatest good that we can contemplate, follow and obey.

The prophets described this, saying to God and God’s people, “You keep him in perfect peace whose mind is stayed on you, because he trusts in you. Trust in the Lord forever, for the Lord God is an everlasting rock” (Isaiah 26:3-4).

While describing the hardships God’s followers would have in the world, Jesus described the work that the Holy Spirit would do in their lives, how God would answer their prayers and how their sorrows would one day turn to joy. Then he told them, “I have said these things to you, that in me you may have peace. In the world you will have tribulation. But take heart; I have overcome the world” (John 16:33).

“These are truths that you must deposit into your treasury right here,” David Wilkerson pointed to his chest. “And when the devil comes to you, you just reach into the treasury and say, ‘Devil, I don't belong to you anymore. You don't have any more power, you have no more authority in my life.’”

Christ promised his followers that he would not leave them to figure out a direction in this world by themselves. “When the Spirit of truth comes, he will guide you into all the truth, for he will not speak on his own authority, but whatever he hears he will speak, and he will declare to you the things that are to come” (John 16:13).

As we pour through scripture, we will better attune our minds and hearts to the Spirit’s voice. He will guide us and give us discernment as we determine what is worthy of being admitted into the treasury of our hearts.

When grief and hardship strike then, the fruits of the Spirit will be what overflows out of our hearts, and that will be glorifying to God. 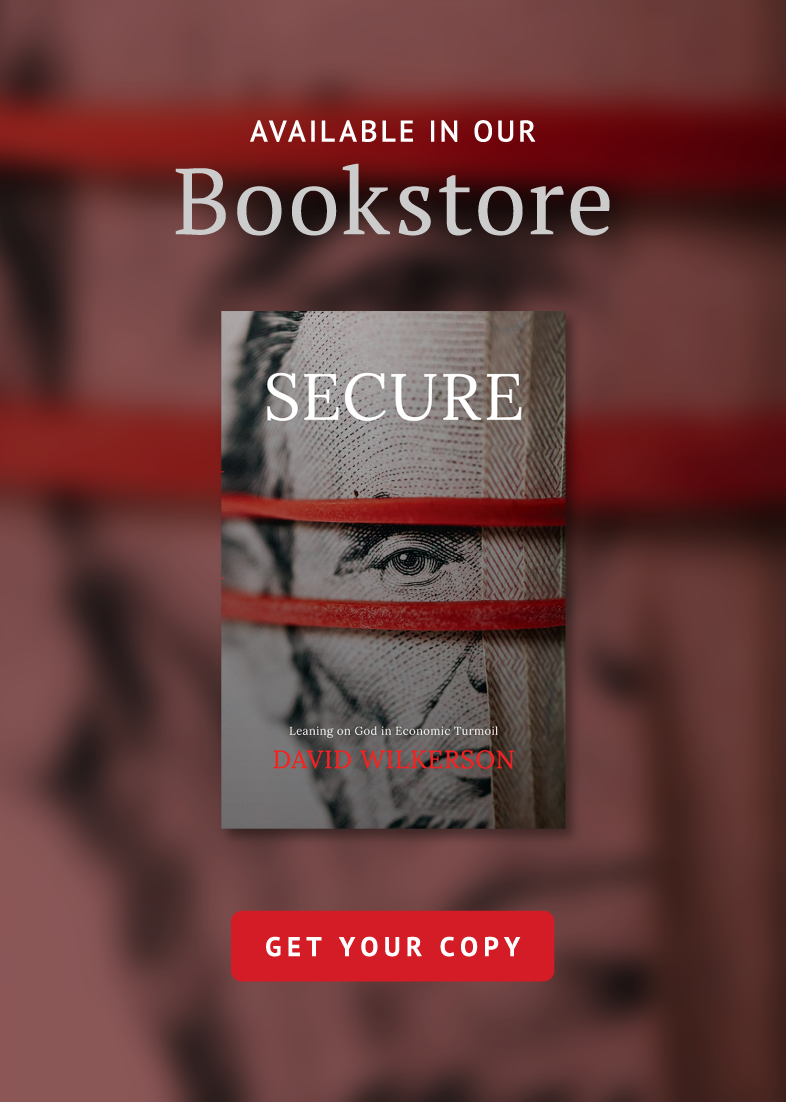