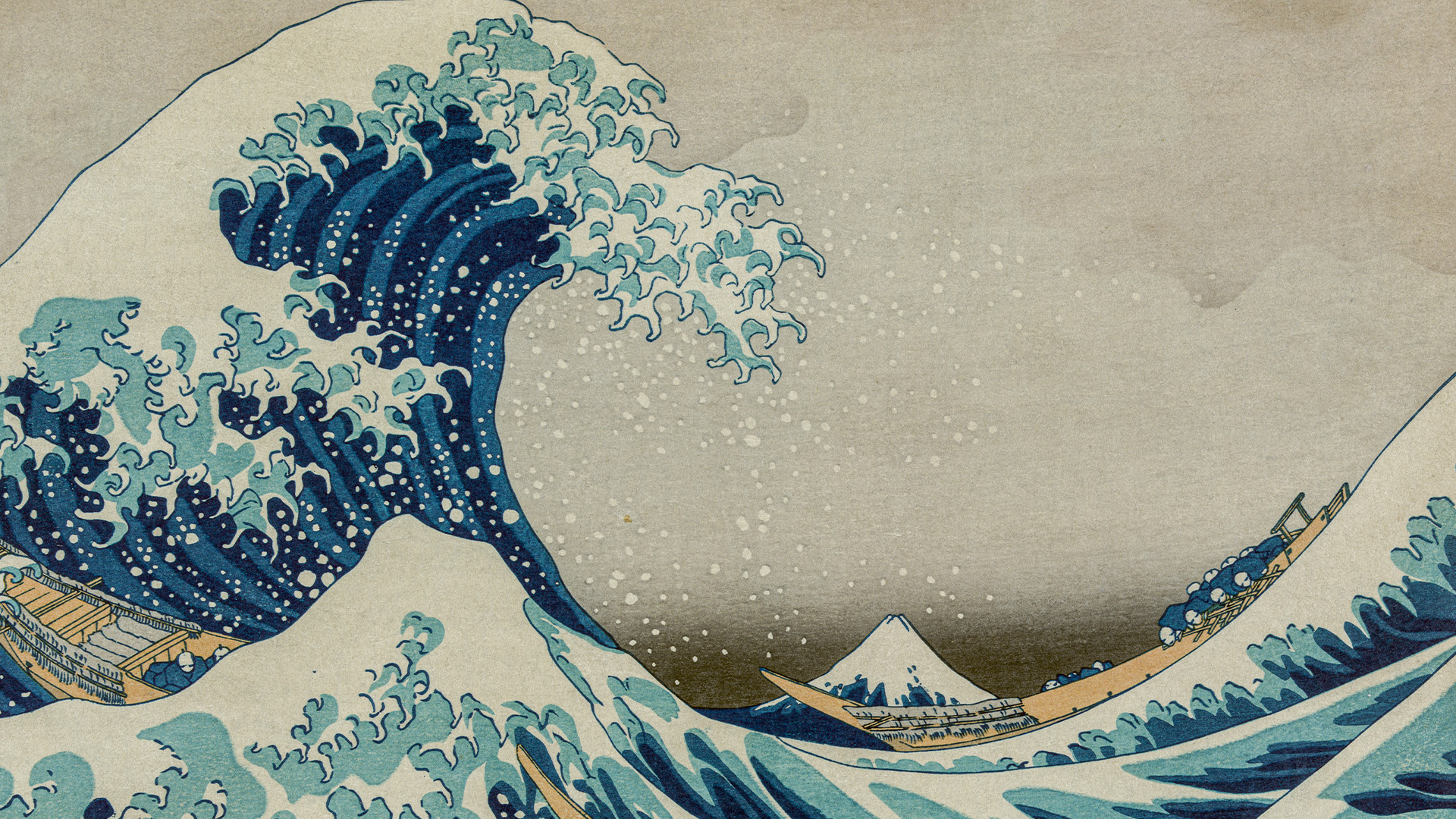 Between the Mountain and the Waves

Humility is one of the most difficult Christian virtues both to define and obtain. What is it exactly? How can we tell if we’re succeeding in becoming more humble?

“The Great Wave off Kanagawa”, one of the most famous pieces of Japanese art, was created during some of the hardest years of Katsushika Hokusai’s life.

In the years immediately proceeding the painting, Hokusai had faced several serious health problems, his wife had passed away, and he had been forced to rescue a grandson from financial ruin, which left him impoverished. Hit by one disaster after another, he began creating “The Great Wave.” Mount Fuji stands in the background covered with a pale cap of snow, and the lighting on the mountain indicates that it’s early morning. It is believed to be a representation of serenity and the supernatural. In the foreground, a monstrous wave curls over men struggling in a boat, the foamy crest above them is jagged like claws. Most interpret this as the struggle of men against the violence and power of the natural world.

Hokusai had created several versions of this painting as a much younger man, but it was only in the wake of personal loss and suffering that he finally created the masterpiece that would become world-renowned.

Reflecting on his own creative process, he wrote, “From the age of six, I had a mania for drawing the shapes of things. When I was fifty, I had published a universe of designs. But all I have done before the age of seventy is not worth bothering with. At seventy-five, I'll have learned something of the pattern of nature, of animals, of plants, of trees, birds, fish and insects. When I am eighty, you will see real progress…”

He mused, “Learn to cultivate the trait of humility. None of us are perfect. We all make mistakes, both in our personal lives and our artistic creations. It takes a lifetime to become a master, and even then we may not achieve that designation. Be thankful for what you have been given and seek to be humble.”

As I researched the labor-intensive process of ukiyo-e, which Hokusai used to create “The Great Wave” as well as learned more about this exacting master of his craft, it struck me that true humility is rarely comfortable to be around.

A Blue Collar Worker in Church

Modern church culture often associates humility with ‘being nice.’ The Netflix documentary Keep Sweet: Pray and Obey discusses the fundamentalist Mormon sect, and how it many people bound in this relentless need to ‘be good’…or as their founder often said, “Keep sweet.” How does this work, though, with what we’re told about Jesus Christ who was perfectly humble and who also regularly annoyed, challenged and offended others?

Jesus offered his disciples an example of what humility should be. “Two men went up into the temple to pray, one a Pharisee and the other a tax collector. The Pharisee, standing by himself, prayed thus: ‘God, I thank you that I am not like other men, extortioners, unjust, adulterers, or even like this tax collector. I fast twice a week; I give tithes of all that I get.’ But the tax collector, standing far off, would not even lift up his eyes to heaven, but beat his breast, saying, ‘God, be merciful to me, a sinner!’ I tell you, this man went down to his house justified, rather than the other. For everyone who exalts himself will be humbled, but the one who humbles himself will be exalted” (Luke 18:10-14, ESV).

It’s easy to view this story as a good guy vs. bad guy story, but recall that Jesus had a religious zealot and a tax collector among his listeners. This story was an invitation into humility for them both.

Most tax collectors or people who worked for the Roman government probably wouldn’t have gone to the temple in the first place. Why expose yourself to criticism and people treating you poorly because they knew you worked for a government they didn’t like or that you were going to demand a part of their paycheck? This tax collector, though, seeks God even when it means that he will be misunderstood and mistreated by God’s people. However, he doesn’t ostentatiously go to the front to prove a point about how God will hear him; he doesn’t cause a scene. He acknowledges that he is indeed a sinner. Maybe he took more money than he should’ve or let someone off the hook, knowing that this meant he wasn’t doing his job properly. Regardless, he almost demands God’s mercy because he desperately needs it.

His mistreatment at the hands of religious people doesn’t make him any less of a sinner than the rude, self-righteous Pharisee in God’s eyes.

Condemning the Pharisee is easily done because they’re almost the Christian equivalent of Orcs or Stormtroopers at this point. What if instead we reframe the story in terms more equivalent to how Jesus’ listeners would’ve heard it?

Two men went into church to pray, one a senior pastor and the other a casino pit-boss. The senior pastor, standing by himself, prayed thus: “God, I thank you that I am not like other men, porn-addicts, divorcees, corrupt entrepreneurs, or even like this casino worker who tempts people into gambling. I bring people to God every week through my sermons. I save marriages through counseling. I pray for three hours every day. I fast twice a week. I give tithes of all that I get.”

Jesus points out that, despite all of the good this man did for the kingdom of God, he was not justified in the eyes of God when he went home that night. Constantly denying the gratification of sin is not piece of cake; budgeting and sacrificing in order to regularly tithe is no joke either. Jesus never condemns the Pharisees for their hard work and rigor in obeying God’s law. In fact, he says, “Do not think that I have come to abolish the Law or the Prophets; I have not come to abolish them but to fulfill them. For truly, I say to you, until heaven and earth pass away, not an iota, not a dot, will pass from the Law until all is accomplished. Therefore whoever relaxes one of the least of these commandments and teaches others to do the same will be called least in the kingdom of heaven, but whoever does them and teaches them will be called great in the kingdom of heaven” (Matthew 5:17-19).

Rather, Christ condemns the Pharisee’s self-righteousness, his need to put himself above other people. Maybe because people criticized him, his calling ‘to live above reproach’ morphed into a need to prove that he was righteous and that God had indeed called him to this work. Regardless, this man’s focus slid off of God and onto his own life and work as compared to other’s lives and work.

I can’t help but wonder if Peter, blue-collar worker turned church leader, was remembering Jesus’ story about the self-involved pastor when he wrote to the early church, “Clothe yourselves, all of you, with humility toward one another, for ‘God opposes the proud but gives grace to the humble.’ Humble yourselves, therefore, under the mighty hand of God so that at the proper time he may exalt you, casting all your anxieties on him, because he cares for you” (1 Peter 5:5-7, ESV).

Standing up front means everyone sees when you stumble. The Pharisee had to balance his call to a higher standard with an equally great need for God’s mercy, even if his partitioners condemned him for being broken and sinful like them.

Mountain of God, Waves of Sin

How do we live graciously with difficult people? How do we accept the feedback of people who nit-pick work they could never manage themselves? How do we admit and repent publicly when we’ve failed? What silences the anxiety and fear that drives us to defend ourselves, paint ourselves in the best light and care far too much about how we’re seen?

Meeting God and keeping our focus on pleasing him is the key. In the God’s Eternal Pursuit series, John Bailey explained, “What drove the Apostle Paul, I believe, was two things: he had an encounter with Jesus, and he wanted other people to have an encounter with Jesus. The second part to that was he knew what it was to live under the law. He knew that it was a broken, dead, empty place.

“When he came to this understanding of the New Covenant in Christ, it so motivated him that he wanted to tell the whole world, and he did. In most of the known world, he planted churches and preached the gospel. It wasn't so he would have a great name. He did it because he was so impassioned to take the message of the New Covenant and the revelation of what Christ accomplished at the cross.”

This humility is passionate, not passive. It’s merciful to sinners but not indulgent with sin. The humble apostle nevertheless knew his calling and fought to protect the newly formed church. He led by example, knowing that he also desperately needed grace. He also caused riots with his evangelism, reprimanded churches, kicked people out of leadership. and wrote authoritatively about the labor and self-discipline required of true believers.

He was a master of his craft who captured the tension between the peace of Christ and the battle against our own demented sin-nature. God’s presence and his promise of salvation are a mountain in our lives, a point that must always be at the center of our work. However, often in the foreground are the whitecapped waves of an unsafe world where we will know heartache, temptation and failure. Humility is holding fast to the truth, even when it makes us enemies, and yet also always acknowledging our dangerous penchant for self-interested blindness. We are living between the mountain and the waves. We must not lose sight of either, and only humility will allow us to do this.

None of us are perfect; all of us are sinners. Sanctification takes a lifetime. Be thankful for what you have been given and seek to be humble.