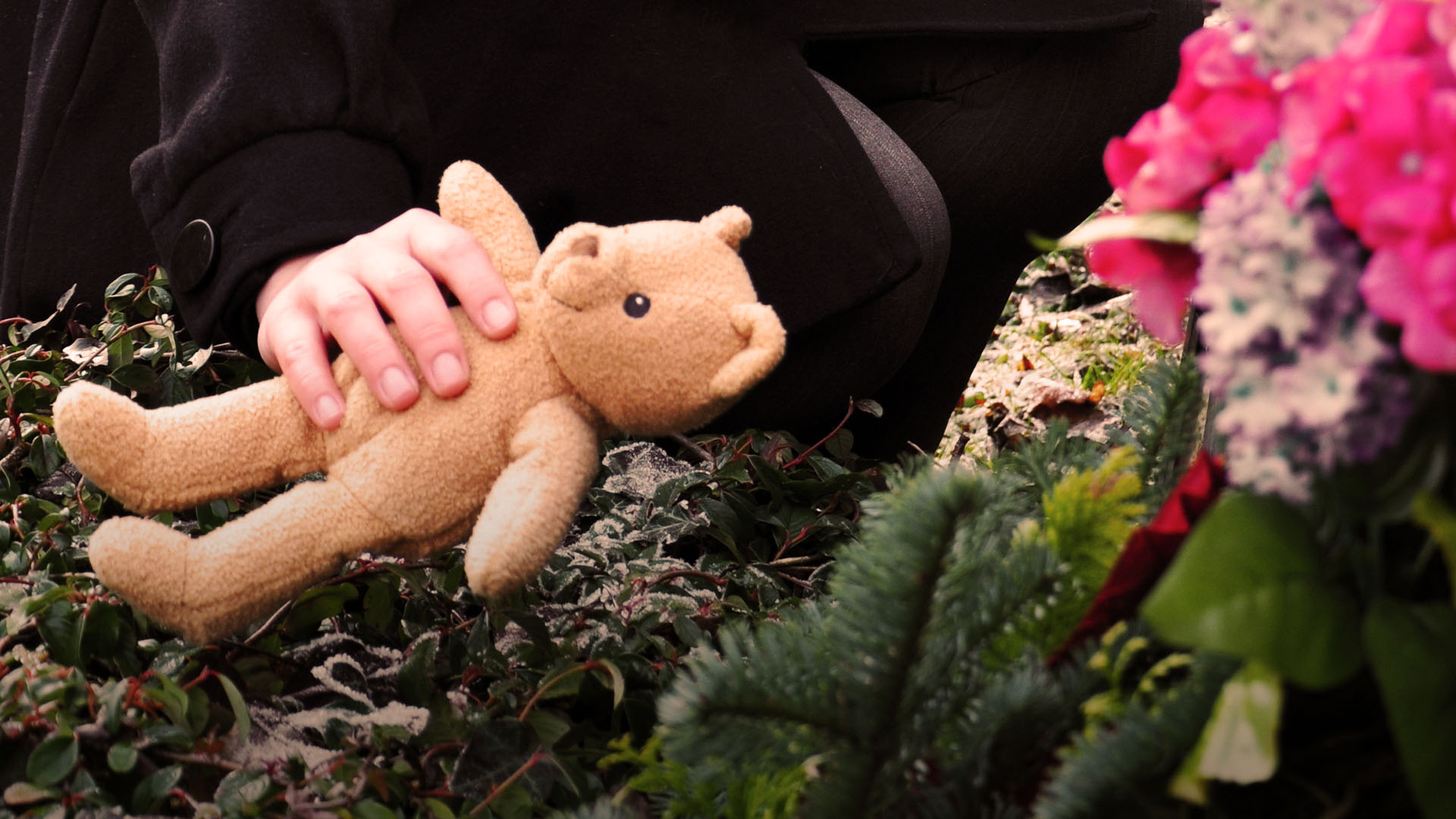 This is Child Loss Awareness Day, and we want to acknowledge the grief and long journey of parents who have had a little one pass away.

In his small book Lament for a Son, Nicholas Wolterstorff wrote about the confusion and frustration caused when pious folks informed him that his grief was borderline sinful because God had taken his son. Other well-meaning people told him that God was pained by the loss but had no responsibility for it.

Wolterstorff, both theologian and professor of philosophy at Yale, wrote in response, “I cannot fit it all together by saying, ‘He [God] did it,’ but neither can I do so by saying, ‘There was nothing he could do about it.’ I cannot fit it together at all. I can only, with Job, endure. I do not know why God did not prevent Eric’s death. To live without the answer is precarious. It’s hard to keep one’s footing.

“Job’s friends tried out on him their answer. ‘God did it, Job; he was the agent of your children’s death. He did it because of some wickedness in you; he did it to punish you. Nothing indeed in your public life would see to merit such retribution; it must then be something in your private inner life. Tell us what it is, Job. Confess.’

“The writer of Job refuses to say that God views the lives and deaths of children as cats-o’-nine-tails with which to lacerate parents.

“I have no explanations. I can do nothing else than endure in the face of this deepest and most painful of mysteries. I believe in God the Father Almighty, maker of heaven and earth and resurrecter [sic] of Jesus Christ. I also believe that my son’s life was cut off in its prime. I cannot fit these pieces together. I have read the theodicies produced to justify the ways of God to man. I find them unconvincing.

Rising From the Deep Silence

Death is an experience that many people don’t know how to approach, even if they’re the one wading through the loss of a loved one, particularly a child, especially a yet-unborn baby.

Some wonderful souls are out there working to reverse this trend. They often work for excellent organizations like the March of Dimes, International Stillbirth Alliance (ISA) and MISS Foundation, which are devoted to helping grieving parents. Still, there is often a great silence surrounding a baby’s death.

President Ronald Reagan declared October to be the time to officially acknowledge bereaved parents, recognizing that this type of loss can otherwise go unseen. “When a child loses his parent, they are called an orphan. When a spouse loses her or his partner, they are called a widow or widower. When parents lose their child, there isn’t a word to describe them.” He and his first wife, Jane Wyman, would have cause to know, having lost their daughter Christine when she was only one day old.

The lack of language to describe this experience despite its commonality — some statistics suggest as many as one in four women have had a stillbirth — can make it feel like something we shouldn’t, or even can’t, discuss.

This can’t be right, though. The Bible talks frequently about men and women who struggled with deeply personal issues. Couples like Sarah and Abraham had to wrestle with the question of barrenness, which could very well have referred to infertility or miscarriages. David grieved for his dying infant son and mourned the death of his adult son in front of an entire nation. Hannah grieved over her infertility in the temple before God and the head priest.

If there is an oppressive silence here, it ought to be broken, and there are many brave souls stepping forward to do exactly that.

Gary Wilkerson wrote about he and his wife’s loss when one of their children passed away. “After eight months Kelly noticed the baby had stopped kicking inside. We tried not to be alarmed and instead turned to prayer. We trusted in God’s goodness, believing he’d protect our child in the womb. But then came the sonogram and other tests, and our deepest fears were confirmed. Our baby had died.

“By that time in my life I had been a pastor for over a decade. I thought I knew God’s precious grace inside and out. But grief is a powerful force, especially when it’s regarding a child….

“Many Christians feel guilty and even apologetic just for having trials,” Gary noted.

“It didn’t occur to them that the Bible is full of those very expressions, echoed by heroes of the faith. David sang openly of his grief. ‘Every night I flood my bed with tears; I drench my couch with my weeping’ (Psalm 6:6). He pleaded with God to pay attention to his grief, saying, ‘Put my tears in your bottle’ (56:8).”

As parents labor through grief and heavy questions toward trust in God, they should know that they’re not alone.

After her miscarriage, Abbey Wedgeworth wrote about the grieving process that she had her husband went through afterward.

“We have lots of questions,” she openly admitted. “What caused the baby to die? Could we have prevented its death? Why surprise us, make us excited, and then shock us with loss? Did God receive our baby? Will its resurrected body be a fetus? Will we be able to conceive again when we want to?

“But those questions only lead to anxiety, dead ends, and frustrations. Instead, we will cling to what we know, to what God has revealed. As Moses put it, ‘The secret things belong to God, but the things revealed belong to us and our children forever’ (Deut. 29:29). So we labor to entrust the ‘secret things’ to a sovereign and good Father….”

God invites us to cross this river of grief with him, a passage that may not answer our questions but which promises that the pain is not pointless.

Aundi Kolber, a Christian counselor, explained how her own journey after a long struggle with infertility has changed her, “After the appointment ended and hours of crying, I finally had words for my husband: ‘If our baby doesn’t survive, I can’t do this again. I’m not strong enough.’ We waited almost a full month in limbo—aching, praying, and holding on to the possibility of a miracle.

“And then we finally said goodbye to our little one.

“A few weeks after my miscarriage and subsequent D&C, I experienced something that stunned me: quiet gratitude for my difficult journey and a profound sense of God’s kindness toward me. I felt bruised and wounded in body and soul—certainly. But, surprisingly, I also felt stronger than I’d ever been, almost like a soldier returning from battle. As my physical and emotional scars were healing, I discovered a deep inner belief living in me: Grounded in my identity as God’s beloved through my faith in Jesus, I am loved, valuable, and strong.

“This abiding belief did not take away the layers of pain and grief I was (and still am) processing, but it has caused me to see my grief differently.”

Passing Through the Waters

Reading Nicholas Wolterstorff’s lament is disquieting because he expresses his grief like the biblical Job, with raw emotion and brutal honesty. He does not try to sweep unanswered questions under the rug or tidy up the ugly harshness of loss. He does not try to run from his anguish; he does not turn away from God but rather faces his Lord squarely without a mask of calm.

On the final pages, he stands at his son’s grave and wonders about the resurrection, when he will see his boy again. There are no easy answers. There are promises.

We are called forward into life, never forgetting but growing around the wound.

Teske Drake shared some practical steps for how to put one foot in front of the other after a miscarriage.

“Can a woman forget her nursing child, that she should have no compassion on the son of her womb? Even these may forget, yet I will not forget you” (Isaiah 49:15, ESV)

“When you pass through the waters, I will be with you;

and through the rivers, they shall not overwhelm you;

when you walk through fire you shall not be burned,

and the flame shall not consume you.

For I am the Lord your God,