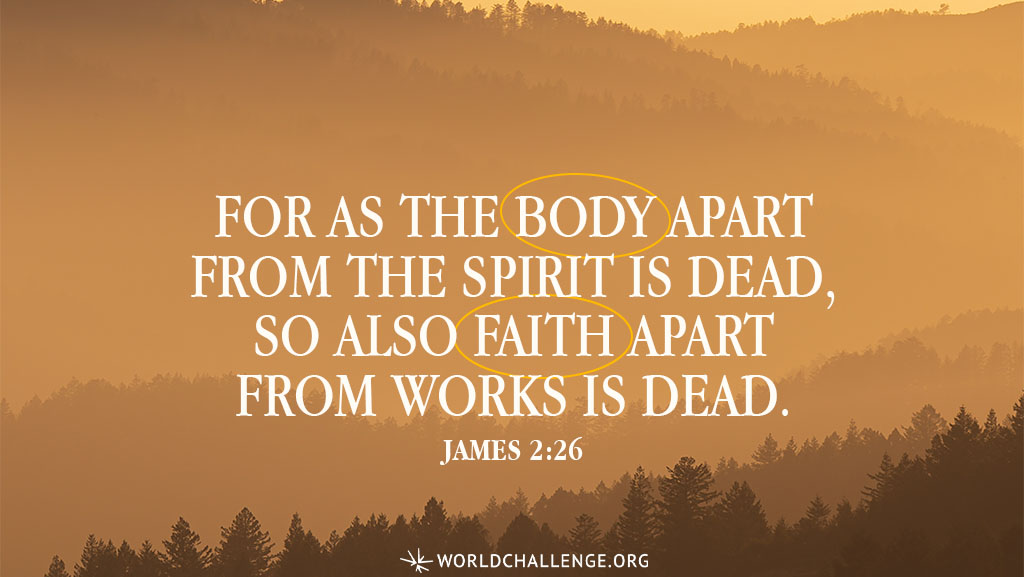 For as the body apart from the spirit is dead, so also faith apart from works is dead.

“And Lot lifted up his eyes and saw that the Jordan Valley was well watered everywhere like the garden of the LORD” (Genesis 13:10).

Pay attention to the Bible’s record of what Lot was doing. He looked at the land with his eyes. He wasn’t looking for instruction, for guidance, for wisdom from the Lord. He saw what he wanted with his own eyes and he aggressively moved to take possession of what he wanted, what his flesh desired.

“It looks good to me. It’s almost like the Garden of Eden; it’s so beautiful, I’ll choose that.”

Lot was looking with his eyes at the situation rather than looking to God. Some of us get ourselves into so much trouble. If we could just know the end of the story, what God is going to do. He is calling us to avoid this or that, but when our eyes of flesh are enticed, we tend to move in that direction because we are not focused on Jesus.

So here’s the simple instruction on this type of passive faith. Faith has to keep its eyes on Jesus.  Faith has to keep itself focused and centered on the Lord or it won’t have the discernment to know which way to go. It won’t know whether to go to the left or to the right.

Lot chose what we know as Sodom and Gomorrah. Many of you today have been making choices with your own eyes because something looks good to you. The temptations of the flesh are appealing to you and you are easily lured to go after those things. God is calling His people to avoid operating in a soulish realm of fleshly ambition but to move into a realm where your spirit is growing while your flesh is decreasing.

That’s called discipleship. It’s called maturing. It’s called walking in a growing faith with the Lord. He’s calling us to move into that place.