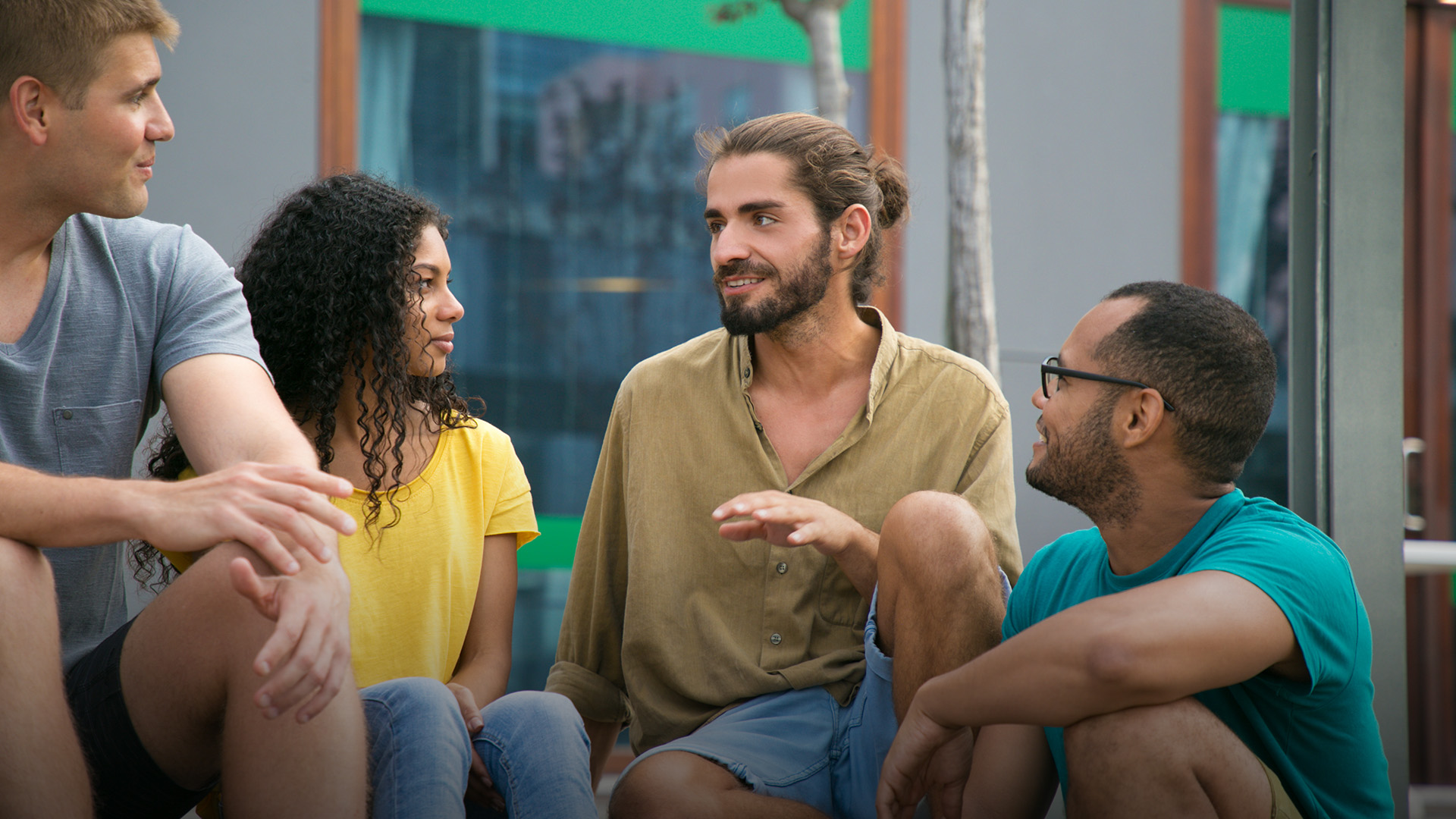 Tell Me a Tale of Triumph

When we’re invited to explain why we follow God, how do we tell this story and why do we tell it the way we do?

Ryan Holiday is the kind of self-made wonderchild that America absolutely loves. His life is the one that many aspire to and parents push their children to attain.

In case you don’t already know it, he gives a brief snapshot of his accomplishments in his book Ego Is the Enemy. “When I was nineteen years old, sensing some astounding and life-changing opportunities, I dropped out of college. Mentors vied for my attention, groomed me as their protégé. Seen as going places, I was the kid. Success came quickly.

“After I became the youngest executive at a Beverly Hills talent management agency, I helped sign and work with a number of huge rock bands. I advised on books that went on to sell millions of copies and invent their own literary genres. Around the time I turned twenty-one, I came on as a strategist for American Apparel, then one of the hottest fashion brands in the world. Soon, I was the director of marketing.

“By twenty-five, I had published my first book — which was an immediate and controversial best seller — with my face prominently on the cover. A studio optioned the rights to create a television show about my life. In the next few years, I accumulated many of the trappings of success — influence, a platform, press, resources, money, even a little notoriety. Later, I built a successful company on the back of those assets, where I worked with well-known, well-paying clients and did the kind of work that got me invited to speak at conferences and fancy events.

“With success comes the temptation to tell oneself a story, to round off the edges, to cut out your lucky breaks and add a certain mythology to it all. You know, that arcing narrative of Herculean struggle for greatness against all odds: sleeping on the floor, being disowned by my parents, suffering for my ambition. It’s a type of storytelling in which eventually your talent becomes your identity and your accomplishments become your worth. But a story like this is never honest or helpful.”

What is the easiest story to tell? The one in which we overcome obstacles and righteously suffer for our (correct, obviously) opinions? Or the one where we’re wrong, we fail and we pick ourselves up only to fail again?

“What’s your testimony?” Most of you have been asked some variation of this question at multiple points in your life. It sometimes starts to feel like an event badge that gets you past security and into the conference.

Most people I know have agonized at least once over not having a ‘good’ testimony, and I would include myself in that camp as someone who prayed ‘the prayer’ at four years old under no special circumstances. I’ve also had nonbelieving friends who were asked about their testimony and fabricated it on the spot. Later, they admitted to me that they did so because they were afraid of being treated differently or badly by believers.

Many of us have a slightly troubled relationship with the idea of a testimony. What is it exactly?  Which elements are necessary in its telling? How important is it actually?

In his sermon “He Lives in Me”, Carter Conlon shared his thoughts on the strange paradox of the Christian testimony. “As you read the New Testament writings of Paul, you realize that he was an absolutely brilliant theologian, but it was the Apostle Paul that God sends to the Gentiles who know nothing about God at all. Paul oftentimes, when he would be called to present a defense for the gospel, would have to revert back to the testimony he had. ‘I was on the way to Damascus. I was there raging against the church, and I saw a bright light and fell off my donkey’

“All of a sudden, people would say, ‘Oh, you saw bright light and you fell off your donkey? Well, the God you serve must be real.’ And God would begin to work through him. Then God sent know-nothing Peter to the know-everything Jews. That's just the way the Lord is…. Now a testimony is our story, but really, it's not just our story. It's the story of Christ working within our lives.”

Many new Christians are instructed to share their testimony in a particular series of steps: the grand struggle before, the dissolute life of sin, the moment of seeing the light, the prayer and the changes immediately seen afterward.

While that pattern may match some believers’ stories, it doesn’t look the same for everyone.

Making a Man of God

“I was born in Canada and in a province called Quebec, in a little town called Ruin, Noranda,” Carter Conlon prefaced his testimony. “I had a nominal church upbringing…. Never really heard the saving gospel of Jesus Christ. I became very disillusioned with that experience; and in my early teen years, I forsook it all….”

Years later, Carter attended a small church, and the presence of the Spirit there touched him. He filled out a visitor card but then promptly forgot about it. A few weeks later, the pastor called and said they’d be sending someone over to talk to him. Carter admitted, “I expected Wednesday night the doorbell would ring, and a couple little old ladies with hats with big flowers hanging off them were going to come in. I would give them tea, and they were going to tell me about Jesus and their church and everything. I would be very nice to them…and then the whole thing would be over.

“Lo and behold, the doorbell rings on Wednesday night. I go to the door, and it’s 6-foot-2 Royal Canadian Mounted Police officer standing at my door. He said, ‘Are you, Carter Conlon?’ I said, ‘Yeah, who are you?’ He said, ‘I'm Hervé. I'm the guy from the church that you went to, and I've come to talk to you about Jesus Christ and what God can do in a person's life.’

“You know folks, I would never have listened to anybody else…. He came back every Wednesday night for about three months. I'm going to confess to you all I wasn't very nice to him. I tried to shake him down…. You know, sometimes you get that impression that it's just people have gone over the edge who come to God, but this guy had a good career. He was advancing in police work. He was intelligent…. It wasn't so much the Billy Graham books he was using. It was his testimony that was stirring my heart. It was his persistence. It was the love that was in him for me that caused me eventually to get a Bible and turn to the Book of John and begin to read it for myself….

“I saw who Jesus was. I saw the claims that he made upon the lives of those who would be his disciples. I closed the book one day, May 12th, 1978... I was on my way to work in full uniform. I pulled my car over on the side of the road in Ottawa at about 3:00 o'clock in the afternoon. I bowed my head behind the wheel, and I said, ‘Lord Jesus’ — it wasn't a prayer of any great faith — ‘if what Hervé has told me is the truth, then I invite you into my life to be my Lord and my Savior.’

“I received Christ in my life and it's not like sirens went off and bells rang or anything like that. I didn't feel any different. I put my car in drive and went to work and worked a normal shift; but the next morning, I woke up and sat on the edge of my bed, and as surely as I stand here tonight, something was different. I couldn't put my finger on it.

I didn't even understand it, but the spirit of God had come into my life. Things began to change. I wasn't thinking the same anymore.”

Carter reflected on those early days, “I remember the first time that I ran into the book of Ephesians, and God's Word said, ‘Husbands love your wives as Christ loved the church.’ You see, we’d had a very difficult marriage situation. I remember driving to work one day, saying, ‘Oh great, God. Love your wife as Christ loved the church? How am I supposed to do that?’”

“I could speak you for another two hours of the things that God has done in my life. I have known victory upon victory because I have simply chosen to believe God and believe his word as stronger than every circumstance.”

Finding the Purpose of Our Story

We can look at the formulas for good storytelling or recall the testimonies we were most inspired to hear, but at the end of the day, what is the story God is asking us to tell? Carter Conlon mused on this topic, saying, “Any testimony that anybody gives…if it draws to the flesh, it's not really a testimony of Jesus Christ. It can be a testimony of that person or his or her exploits or the things that they've done, and if it draws attention to the person, you're not hearing a genuine testimony of Jesus Christ.

“A testimony that we give is a testimony to the faithfulness of the one who called us out of darkness and into his marvelous light. The one who's open prison doors in our lives and set us free.”

How that story of God’s internal work looks for people may vary quite a bit for each individual. Some suffered a great deal, and their story is about looking back and recognizing all the moments that God was beckoning to them or protecting them until they finally saw him. Others came to Christ with seeming ease, and their story is about learning to trust God through terrible circumstances later or stepping out against the advice of others to follow the Spirit’s call.

Everyone has a story about their journey with God. For those who choose to ignore him, their story is often about how they rescued themselves and became their own gods. For those who choose to submit to him, their story is about how they failed, how he rescued, how he continually redeems all that has gone wrong and how he invites them into his joy.

So what’s your story?