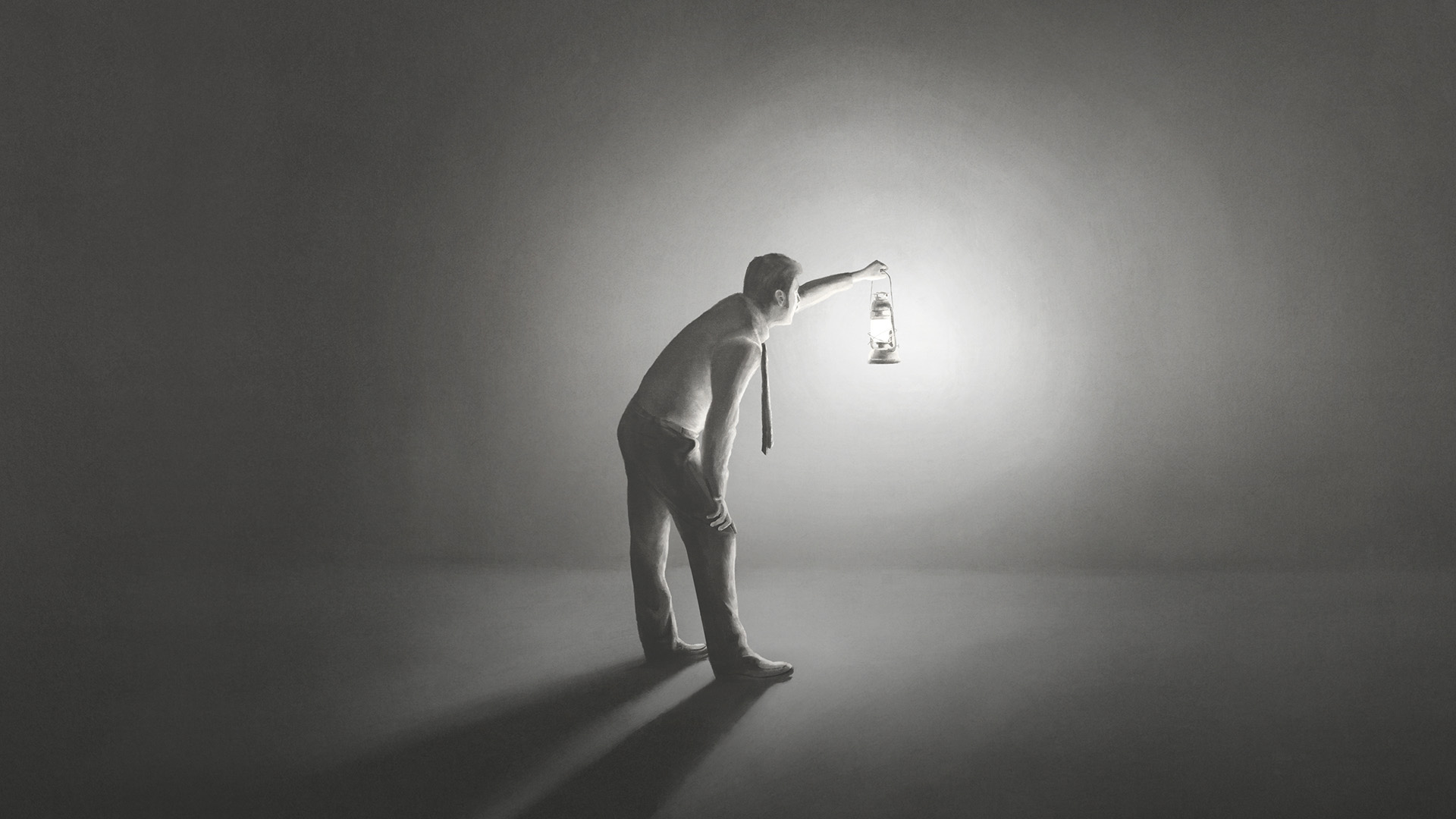 Stepping Out of the Darkness

Scripture calls believers the light of the world; despite this, we’re often troubled by sin and struggles, so how do we live out this calling?

Brian Keenan stood, looking out at the desert. An oppressive heat pulsed over him and the entire land, but then a cold blast of wind hit him. It chilled him to the bone as the wind tore over him, pieces of grit and sand stinging his skin.

Brian knew he wasn’t outside; he was locked in a cell, somewhere deep in the dark. He didn’t know how many days he’d been there; he only knew that it had been a long time. Islamic extremists had taken him captive and transported him to another location; he was fairly sure he was in Beirut. He knew these things, but the desert remained, and he could feel the wind and the sand.

Another took its place. “I heard music,” he recalled. “It seemed to be coming in through the cell. I knew it wasn’t, but I heard it. It was all kinds of instruments being played. I heard bag pipes. I heard African drums…zithers, flamingo guitars. It was really interesting. And then when it wouldn’t go away for several minutes, that got really frightening. When I was frightened, the tempo of it lifted, and the volume lifted. And more instruments and cellos were playing and pianos… Everything was happening louder and louder and louder. That was when I got really afraid and started banging my head against the wall, just to make it go away.”

When Brian Keenan was finally released from isolation, he discovered that he had been held in captivity for four and half years. After he was released, he could barely eat anything offered to him and found he powerfully disliked walking on carpet. To this day, he struggles with bright lights or sudden noises. Doctors have found that victims of extended isolation, especially in the dark, often suffer from temporary color-blindness and will often sleep for 30 or more hours at a stretch, waking to the belief that they’ve only taken a short nap.

People are not really meant to live in the dark for protracted periods of time, and yet our lives are often filled with darkness that seems to surround us with no way to escape.

We often tend to speak about darkness as if it were an outward state or entity. While the Bible certainly acknowledges this, Jesus seemed far more concerned with another aspect of darkness. “The eye is the lamp of the body. So, if your eye is healthy, your whole body will be full of light, but if your eye is bad, your whole body will be full of darkness. If then the light in you is darkness, how great is the darkness!” (Matthew 6:22-23, ESV).

How often do I feel my inner darkness rise up and engulf me? As the Apostle Paul wrote to Titus, “For we ourselves were once foolish, disobedient, led astray, slaves to various passions and pleasures, passing our days in malice and envy, hated by others and hating one another” (Titus 3:3). Our sin makes fools of us. It leads us to despise and mistreat others. It makes us hateful to people around us. It leaves us terribly isolated.

Before Christ saved us, we were slaves to this sin, as Paul so aptly described it. As believers, we have an escape hatch through the Spirit, but we have to choose to make use of it. There’s a good reason why Paul wrote to the believers in the church, “For the whole law is fulfilled in one word: ‘You shall love your neighbor as yourself.’  But if you bite and devour one another, watch out that you are not consumed by one another. But I say, walk by the Spirit, and you will not gratify the desires of the flesh” (Galatians 5:14-16).

‘Bite and devour one another’—that’s another way to describe what the darkness of sin automatically starts doing to us and our relationships.

Reflecting on Jesus’ words in Matthew 6, the venerable Matthew Henry put it another way, “If we aim honestly, fix right ends, and move rightly towards them, if we aim purely and only at the glory of God, seek his honor and favour, and direct all entirely to him, then the eye is single; Paul’s was so when he said, ‘To me to live is Christ’; and if we be right here, the whole body will be full of light, all the actions will be regular and gracious, pleasing to God and comfortable to ourselves; but if this eye be evil, if, instead of aiming only at the glory of God, and our acceptance with him, we look aside at the applause of men, and while we profess to honour God, contrive to honour ourselves, and seek our own things under colour of seeking the things of Christ, this spoils all, the whole conversation will be perverse and unsteady, and the foundations being thus out of course, there can be nothing but confusion and every evil work in the superstructure.”

The moment that pride which seeks self-satisfaction enters our motivations, our actions are tainted, no matter how benevolent they may appear. That stain sinks into our conversations and interactions with others. It darkens our eyes, so to speak.

How do we combat this corruption then? It’s all good, well and sanctimonious to say ‘by walking in the Spirit,’ but what does that look like?

In a sermon, David Wilkerson analyzed Jesus instructions to the people following him. “The light is among you for a little while longer. Walk while you have the light, lest darkness overtake you. The one who walks in the darkness does not know where he is going. While you have the light, believe in the light, that you may become sons of light” (John 12:35-36). Reflecting on this passage, he wrote, “Now when I reread this awesome warning of Jesus, to walk and believe in the light lest darkness comes upon you, the Holy Spirit stopped me in my tracks. I had to read it and reread it. The Holy Spirit said, ‘David, this is for you and for my people.’

David went on the explain. “When we think of spiritual darkness we think of atheists. We think of jaded sinners who are groping around day by day in some kind of sorrow and emptiness of heart. …There is a darkness that is of this world, but that’s not the darkness Jesus is talking about. He’s talking about the darkness that comes on his children who don’t believe him, who will not walk in the gospel that they have received. They are not appropriating the promises that have been offered through covenant.

“He said this darkness is a cloud of confusion, spiritual blindness, indecision, gloom in spirit and mind and body. …There is a darkness that falls upon those Christians who will not mix the word they hear with faith and appropriate it in their daily lives.”

If we don’t regularly remind ourselves of God’s love and goodness toward his children, we may easily slide into a self-preservation mentality. In that space, we will run over others in order to obtain whatever we feel like we need to survive; we will grasp at things that may or may not be healthy for us simply because they sooth our feelings of anxiety or pain.

If we don’t regularly recall God’s promises of justice, we will either flop into apathy or bitter rage about the world’s corruption. We may embrace a ‘live and let live’ mentality, or we may become convinced that the onus to right the world’s wrongs falls on us. Both of these paths ultimately land in despair.

If, however, we focus on God’s Word and promises, if he is the central point of our thoughts and the loadstone we return to with every emotion, the darkness both within and without will not overtake us. As David reflected in his songs, “For it is you who light my lamp; the Lord my God lightens my darkness” (Psalm 18:28, ESV). This isn’t a passive note; it’s a path of action, a state of continual choosing what I focus on in order to combat the dark.