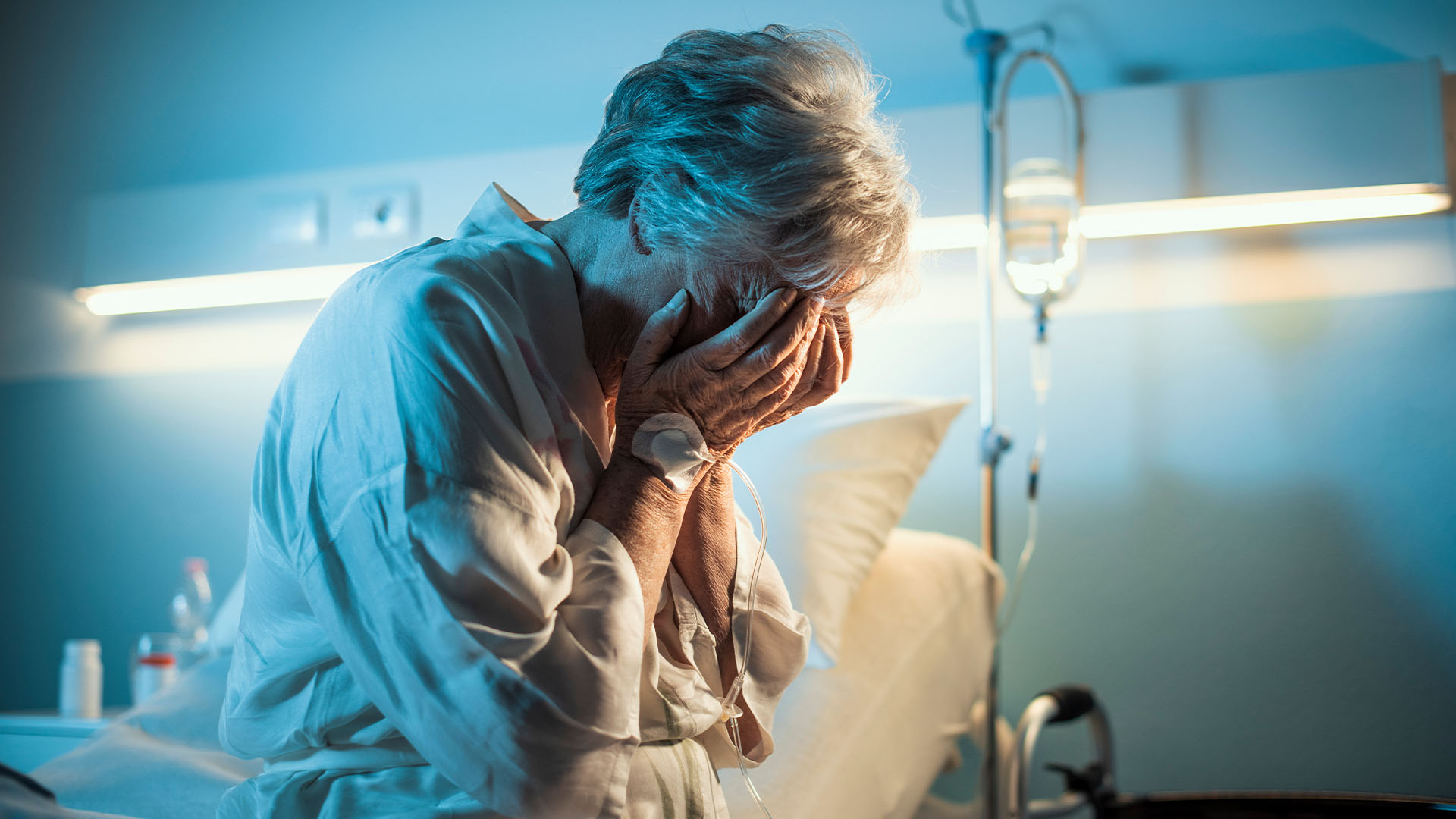 Getting Hammered Down by Life

Problems and suffering in life can sometimes feel relentless, so how do we endure when our trials and complications just don’t stop coming?

If you’re old enough, you probably remember Dan Jansen. At the 1988 Olympics, Jansen was a favorite to win the 500-meter speed skating race. Hours before he was slated to step out onto the ice, he received a call that his older sister who had encouraged him through all the trials and work of becoming an Olympic athlete, had just died of leukemia.

Shocked, Jansen considered dropping out but then decided to race anyway in honor of his sister.

He set up alongside other athletes who were the world’s best, trying to steady his mind. On the first turn, seconds into the race, he slipped and fell. His chance to metal in the 500 was lost. In the 1000-meter race a few days later, Jansen had a record-setting start, but he fell again. Jansen would return for the 1992 Olympics and came heartbreakingly close to metaling only to fall short again. He arrived at the 1994 Olympics, determined to stand on the metal podium. The difference this year was that he was married, had a coach who’d been training him harder, a sports psychologist to keep him from choking under the stress, and his father now retired and traveling with him.

Despite being the first man to break 36 seconds in the 500-meter speed skate, Jansen finished 8th that day in Lillehammer. He was crushed, convinced that he had lost his last chance to win an Olympic metal.

Nevertheless, he got ready to race in the 1000 meter a few days later. As he flew across the finished line, he stood up to find that he had not only won gold, but he had also set the world record.

Reflecting on that day in 1988, Jansen mused, “I learned you have to get up and go on with your life no matter what the situation is. I didn't feel like it was a mistake to go out and skate. I still don't. I've learned to look forward to tomorrow, every day.”

As inspiring as Jansen’s quote may sound, the fact remains that, for many of us, our struggles feel insurmountable and we simply may not have the strength or resources to keep getting back up every time we’re knocked down.

Everyone struggles at times, no matter how disciplined and mature a Christian we are. The Apostle Paul wrote about a thorn in his flesh (see 2 Corinthians 12:7-9) and confessed “…we were so utterly burdened beyond our strength that we despaired of life itself” (2 Corinthians 1:8).

No matter how much we may like to believe that we can overcome anything with enough effort, scripture tells us, “None is righteous, no, not one; no one understands; no one seeks for God. All have turned aside; together they have become worthless; no one does good, not even one” (Romans 3:10-12, ESV). We all fail and fall short, and that reasonably happens most often when we’re under pressure, facing uneven circumstances and not at our best.

Some people blame God like Adam in the garden (see Genesis 3:12), saying things like “God didn’t lift me out of this terrible situation. My spouse still left me; my child is still sick; my family is still estranged; I’ve lost my job or house. The waves just kept hitting me, and God never intervened.” Or they may even claim, “God made me with homosexual desires; God put this difficult person in my life; God didn’t give me a good job, so that’s why I’ve committed these sinful actions.”

The Bible bluntly points out, though, “Let no one say when he is tempted, ‘I am being tempted by God,’ for God cannot be tempted with evil, and he himself tempts no one. But each person is tempted when he is lured and enticed by his own desire” (James 1:13-14). We give in to our own demented hearts, and it’s hard for us to admit that we’re the problem, not God.

Some people simply resign themselves to suffering or evil in their lives. In a way, this can seem like the most ‘holy’ approach because we’re not complaining or struggling with our circumstances. This mentality, though, doesn’t mesh with David’s psalms where he wrote, “I believe that I shall look upon the goodness of the Lord in the land of the living! Wait for the Lord; be strong, and let your heart take courage; wait for the Lord!” (Psalm 27:13-14). He anticipated God’s hand moving in his life while he was alive to see it, not after he’d died.

Read Job 3 where he laments, “Why did I not die at birth, come out from the womb and expire?” (Job 3:11). Later, he says, “Though he slay me, I will hope in him; yet I will argue my ways to his face” (Job 13:15). God answers Job, and although he rebukes Job for not fully trusting that he was in control, he still blesses Job and restores his life (see Job 40-42).

Trials are not our excuse to blame God because too often we’re implicit in our own suffering, but we also aren’t invited to give up and simply assume God doesn’t care about our pain.

So what is the correct response when we’re faced with more problems than we could ever handle on our own or situations far beyond our strength to correct? In a sermon, Tim Dilena commented, “Here's what I found out that brought me through this week, and I hope it becomes encouragement to you. When I find myself asking the question, ‘What do I do when the battles keep coming?’ Here it comes, folks. I need two things. I need the people of God, and I need a word from God.” What’s more, he noted that a word from God is more than just pulling out informational articles and sermons. “If all you do is listen to sermons and you don't know how to praise and you don't know how to worship, the danger is you can get information without getting transformation.”

When we’re going through hard times, having friends to lean on when they also know and trust God can be an incredible godsend in the truest sense of the word. This isn’t casual community, people you occasionally chat with in the church lobby. This requires deep friendships that have been fed over years and intentionally built up. This is what the scriptures speak of when they noted, "A man of many companions may come to ruin, but there is a friend who sticks closer than a brother” (Proverbs 18:24).

I have three dear friends who have stuck with me for over a decade. They have seen me at my worst. Although all of us now live in different cities, we still talk to one another and regularly check in on each other’s lives. We’re brutally honest sometimes, both with our own lives but also with one another. We pray for one another, not polite prayers but undisguised and true. These friendships didn’t take shape overnight. They took years to form. Another close friend was initially just a roommate, and then we went through some of the toughest years of our lives together. Our relationship has a raw strength to it that perhaps it couldn’t have happened any other way. We saw each other break and rally then break again and only rise once more thanks to the Holy Spirit day-by-day. We know one another.

These are friends who, in many ways, are the living, beating blood of community; so often God has spoken to me through them. Some days, they are all that keeps me alive and listening to God. Without them, I don’t know where I would be. Actually, that’s not true. I do know. I wouldn’t be here without them. God has used them to bring me to where I am in life. I have been moved by my Father’s hand through their hands and voices.

The other area of greatest hope and transformation despite hardship is the church. Whatever it’s faults — history has recorded many faults indeed, from the excesses and crusades of the Catholic church all the way to the modern, grievous abuses of authority recorded in The Rise and Fall of Mars Hill — the church, the bride of Christ, is where God often choses to meet his people. Like it or not, the Spirit seems to move differently through a group of God’s people when they are gathered together, hence the command, “Let us consider how to stir up one another to love and good works, not neglecting to meet together, as is the habit of some, but encouraging one another, and all the more as you see the Day drawing near” (Hebrews 10:24-25).

Here God meets us to give us strength we do not have in order to go through the greatest hardships, to overcome the highest waves and push through to the end of our races.